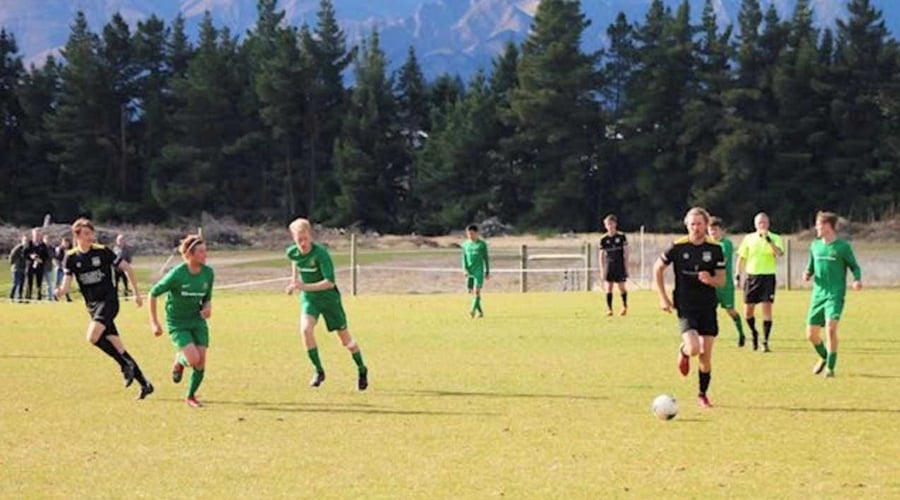 Straight from the first whistle it was a game of contrasting styles as GI looked to impose their long ball game and play everything through, and off, the robust Matt Brazier, while Wanaka looked to play a shorter passing game.

It was GI and Brazier who attacked early on. Brazier twice scored from offside positions in the first twenty minutes, as Wanaka’s centreback pairing of Alan Carmichael and Thomas van Hees kept a well organised defensive line.

Wanaka striker Steve Pleskun and leftback Adam Hewson were causing Gi problems. Pleskun forced a save from Firth in goal for GI after in the tenth minute then again in the 15th minute as Pleskun blazed over the bar from a handy position. Hewson was making dangerous runs down the leftwing, but not quite finding that final pass or shot to finish of the promising moves.

Green Island keeper Firth continued delivering long balls to Brazier but Wanaka stood firm, matching his physical presence - something they had failed to do in previous encounters. As the half wound down it was another jinking run by Hewson that almost broke the deadlock. He beat two players and drove into the GI penalty box. His cross to the incoming Pleskun was well read by Brynn Sinclar who cleared the danger.

The second half was similar to the first with both teams having some clear chances to score. In the 65th minute it was Firth with a long goal kick who found Brazier. He flicks onto the supporting run of Liam Carrington who by his standards had a quiet game. The ball drops into the Wanaka penalty box and Wanaka’s keeper Aaron Molloy advances and holds his space as the on rushing Carrington headers the ball to the side of Molloy as the two collide. GI appeal for a penalty as the ball is cleared for a throw in and after some debate the throw in is awarded. A crucial stage of the game and Wanaka feel the correct decision has been made, obviously GI and their supporters feel hard done by.

Wanaka continue to absorb the pressure GI are applying from free kicks and corners and the game looks like it could end in an exciting nil nil draw.

Hewson, Pleskun and Toa Roode all have shots which don't trouble Firth, meanwhile Molloy makes a couple of great saves to deny a freekick from Milton and one-on-one at the feet of Brazier. Finally in the 90th minute Wanaka take the lead.

Ironically, it's Wanaka who play a long ball from Carmichael who doesn't quite reach Pleskun. Milton wins it and plays it forward, but its Wanaka’s substitute, Scott Mitchell, who attacks the ball around the centre circle, wins it, and chips a tantalising ball in behind GI’s centre back Porteous. Firth comes out as Porteous retreats to cover, but from the blindside Pleskun nips in between the two and headers the ball over the advancing Firth into the empty GI goal. 1-0 up just minutes from full time.

A fantastic result for Wanaka. Aaron Molloy received Man of the Match as he pulled off a couple of crucial saves to keep Wanaka in the game.

Next weekend Wanaka takes on University in the last game of the season in Dunedin, 7pm kick off.

A shout out to our match day sponsors - Custom Digital. Specialising in bringing your home to life with innovative technology. Check out www.customdigital.co.nz today.

Finally, of course, a massive thank you to all the supporters that have come and cheered us on all season.